As an “Irish” blogger I am often asked about Irish things, like “where’s best to celebrate Saint Paddy’s day”, which is just a ridiculously hard question to ask me, given I’ve never celebrated Saint Patrick’s Day in my life. Because in Bangor, along with many ‘unionist’ parts of Northern Ireland, there are no celebrations. And while people do push the idea of St Paddy’s Day in Bangor, the last thing we need is more contentious parades, with drunks and flegs, and it’s just a really bad idea. So the closest I have ever been to Saint Patrick’s Day celebrations was when stumbling out from Great Victoria Street Station in Belfast, only to realise the tri-colours, drunks, police and impending riots, and turned back on to the train home again. I was as a kid at the time. And in many ways, Irish culture is still very alien to me, where the closest I would ever come to ‘Ireland’ was Belfast International Airport, on flights as far from here as possible. But with my more recent returns I have promised to embrace and explore the contrasting cultures of the island, and where better to start than with Saint Patricks Day in Downpatrick. The burial place of Saint Patrick, where parades are less sectarian, the crowds are more family-friendly, and it’s just much more culturally significant. 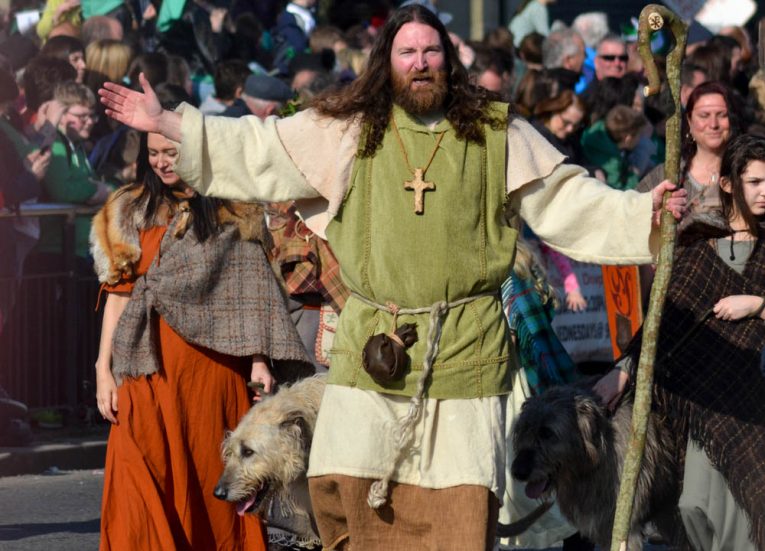 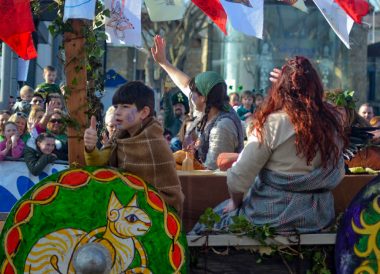 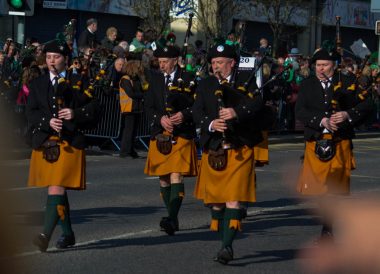 There are no train connections to Downpatrick meaning it’s not easy to reach (unlike celebrations in Belfast or Dublin) without personal transport. And while there are buses to Downpatrick, these take over 2 hours from Bangor, via Belfast, and is it really worth it. So I instead invited my mum to drive me, while I warm up with some beers in the passenger seat, and then later have her pay for pints and chips in town. Mum’s are great. So Downpatrick is roughly a 45-minute drive from either Bangor or Belfast, and we leave at around midday, worried that parking will be hard to find any later. So, arriving, we easily find parking along the back roads towards Saint Patrick’s grave (Down Cathedral), then it’s a quick walk down to the main street, via Saint Patrick’s Visitor Centre and Saint Patrick’s Square. A lot of things are named after Saint Patrick in Downpatrick, and they seem to celebrate him year-round here. Anyway, most of the crowds are found in Saint Patricks Square where a stage has been set up with Irish dancers and presenters and whatnot. Local celebrities maybe, although I wouldn’t know. There are also a number of kiosks in the square with face painting stalls, and burgers and hot dog stands, and crepes, which are not overly Irish to be fair, but stew has never really taken off as an Irish street food snack. 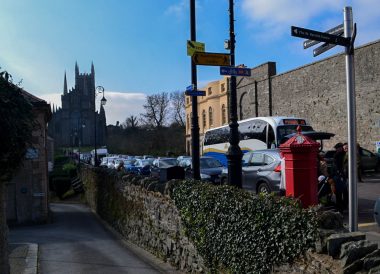 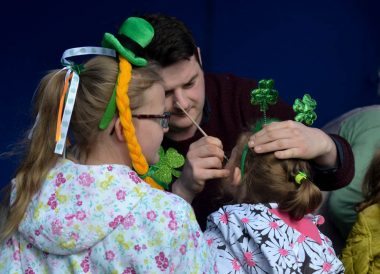 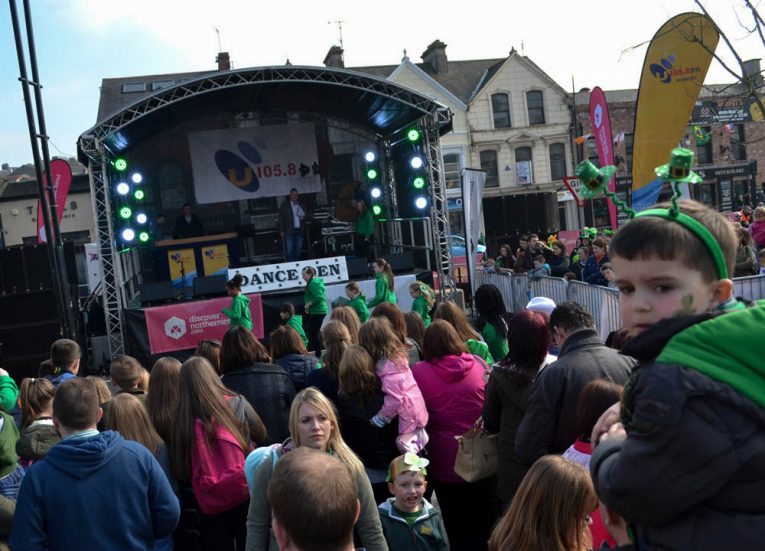 With time to spare (1hour 30mins) we decide to look for some traditional “Green Guinness” and head off to “drown the shamrock” in one of the main street’s local bars. But asking one of the bibbed organizers/attendants we were told that they were clueless as they’ve never set foot in Downpatrick before. Because by now all the local Downpatrickians are either celebrating or drunk, I guess. So we circle the town centre only fail to find any overly inviting pubs, and this inevitably leads us back to the beginning opposite Saint Patrick’s Square. Here we find a pub called Murphy’s, a good Irish name, although it’s far from the stereotypical Irish pub with fiddles, drunks and scruffy folk. It was more, as they say in Donegal, “protestant looking”, clean cut and proper. The place is also huge, so we have no problem finding seats inside, although we opt instead for the beer garden tables outside, because I get claustrophobic and depressed in bars. And we immediately feel out of place as the only people drinking Guinness, whereas the youngsters surrounding were on the cider and alco-pops and WKD. So after a pint or two, we head back out to the street where some young local scamps are racing up and down the street in some sort of organised Saint Patrick’s race. A bit like a warm-up to the Saint Patrick’s parade I guess. 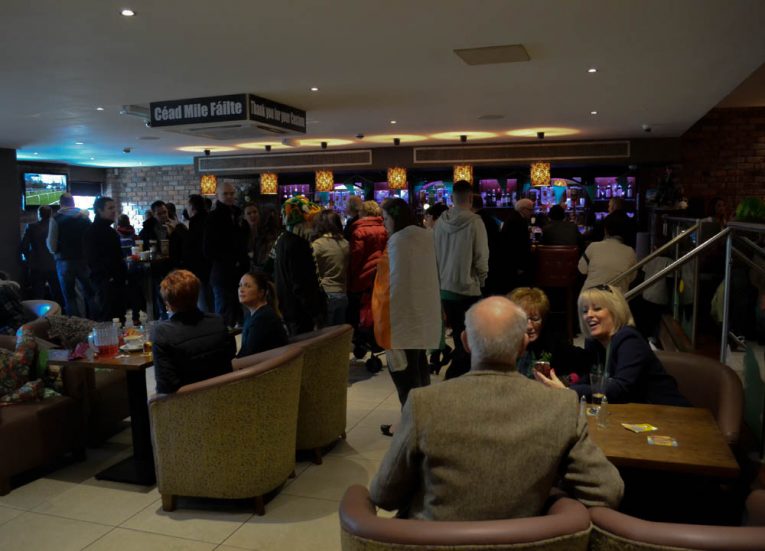 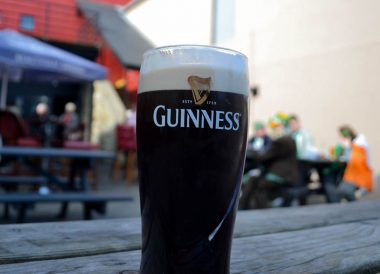 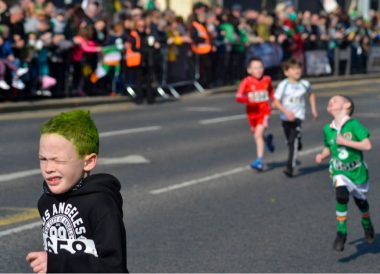 We still find the front row at the barrier at this time (15 minutes to go before the parade) so there’s no real need for pushing or shoving for views. The actual parade then starts at 14:30 where it leaves from outside centre (Ardglass Road) and, while I expect a long wait, it arrives after no more than 5 minutes or so. The procession begins with a parade of motorbikes and vintage cars, which can easily run the circuit in no time, followed by the rest that plods along slowly behind. It does take a while to pass, and in all the parade lasts for roughly one hour (14:30 – 15:30), with leprechauns and other Irish cliches. Although they were oddly outnumbered by Chinese dragons and other less likely cultural influences, as the celebrations here feel more like cross-community parades, shared by local organisations and youth groups. As the shamrocks and tricolours appear to be left behind, if there ever were any. That’s more for the Americans and the tourists apparently. So by the end of the festivities in Downpatrick, again things were kicking off around the parades in Belfast, with Facebook posts from friends who were escaping the impending riots. Instead, it was the opposite here, a positive, and safe, family-friendly affair. 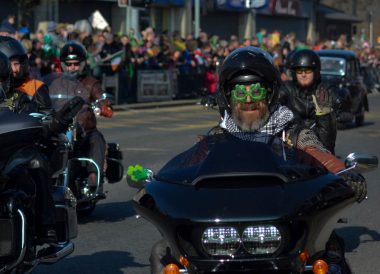 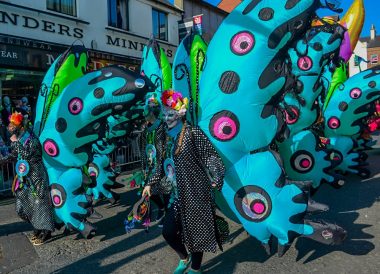 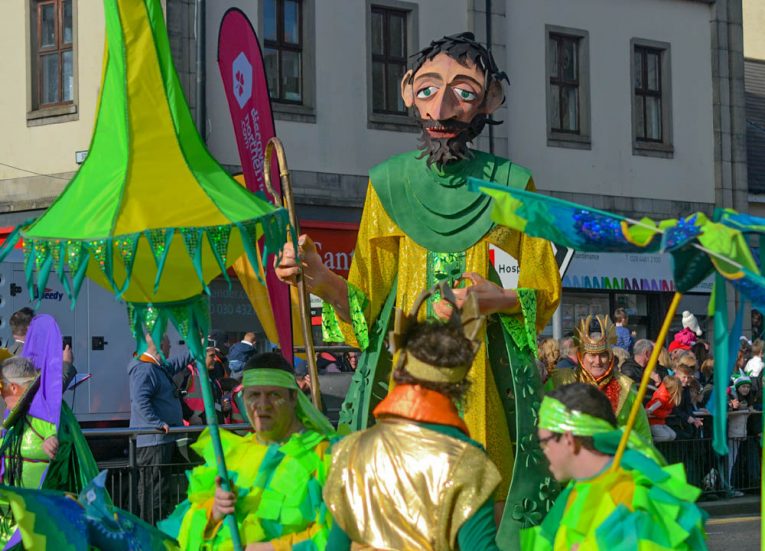