It has to have been a good 15 to 20 years since I last explored the top forests of Crawfordsburn Country Park. Or at least I hadn’t really seen past the visitor centre and the front perimeter trees of Crawfordsburn Beach. But in the past month or two I have been down a good 5 times to follow the changing colours through the Autumn, as I again realised what a fantastic attraction we have here right on our doorstep in Bangor. Something which was confirmed this week (in mid-November) when I brought Fanfan (from Thailand) for her first visit to the forest park. When she tells me that it’s “magical” before making comparisons to “Narnia” and “Harry Potter”, as well as complaining “why have you never brought me here before”. Although I kind of have, or I had at least hurried her to the Crawfordsburn Beach area, wrongly thinking that someone from Thailand (a country with some of the most beautiful beaches in the world) would be interested in the cold, breezy shores of Northern Ireland. As there’s otherwise no such thing as autumn or fall during the relentless heats and sunshine of Southeast Asia.

The Waterfall and Viaduct

So I brought my drone down on a more recent visit, to get some videos around the forest park, and to try and capture the Bangor-Belfast train passing on the Crawfordsburn viaduct (as above). And at the time I accessed the country park from the small village of Crawfordsburn where a small lane leads down next to the Old Inn Crawfordsburn Hotel. Which sits directly above the ‘Waterfall’ of the Crawfordsburn Country park. And this for me is the best part of the park to explore, where there are winding tracks and tiered cliffs and climbs, which follow the river passing through Crawfordsburn Country Park. Then further again finds the Crawfordsburn viaduct, an elevated train track that towers into the canopies of the forest park, and just looks fascinating from beneath. As well as all the nice scenery that follows the walk towards the coastline (again, watch the video above). Alternatively, to reach the same area, it can be easily accessed by the first clearing and kerbside parking, just after the small train bridge on entering the main gate of the country park. 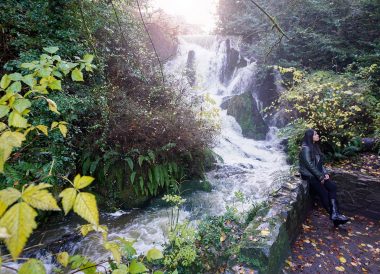 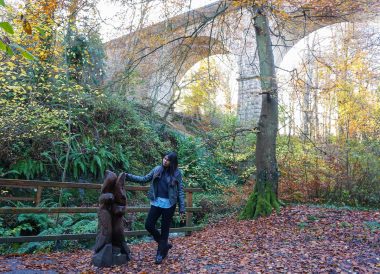 Crawfordsburn Beach would likely be the best sand beach along this coastline, so it can be busy on the rare sunny summer days of the year, although it’s otherwise relatively untouched and quiet. However there is more to this coastline, as Crawfordsburn Country Park stretches in both directions; following the coastal path right to the old boathouse at Swinley Bay, and then a left turn leads to Helen’s Bay Beach and the old World War military station at Grey Point Fort. And it technically ends around 500 meters or so from the fort, when reaching another old stone boathouse towards Seahill. The length of the coastal walk seen in the video below (1:35 to 2:42). Although I probably wouldn’t bother following this far. However there is a handy train station in the coastal village of Helen’s Bay (station found here) for those travelling to Crawfordsburn Country Park independently. This walk is also part of the Bayburn Trail which I plan to share in its entirety at some point as it leads to main roads, and ultimately away from the scenic forest parks and coastlines. 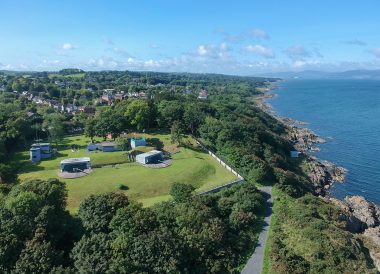 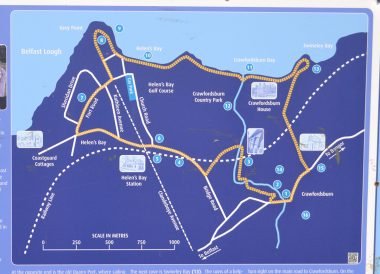 Following the road through the country park (there only is one road) you will first pass the Crawfordsburn Country Park visitor centre, before reaching the main car parks and Crawfordsburn Beach. Which has parking right outside. So it is worthwhile calling in for those new to the region or have kids, as there’s lots of info and educational displays sharing the creatures and critters of the forests, the marine life of the rockpools and sea, and just nostalgic photos and stories from local life in nearby settlements e.g. Crawfordsburn. There is also a small restaurant and cafe (the Woodland Cafe) which serves food through from Breakfast with Ulster Fries etc in the morning, through to lunch with a canteen style menu and carvery (here for traditional Northern Irish foods). Although we normally just go for coffee and tray bakes. From the visitor centre there is then a simple walkway that leads straight to the seafront and Crawfordsburn Beach. 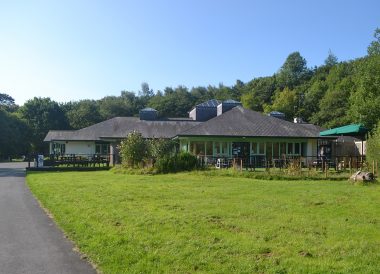 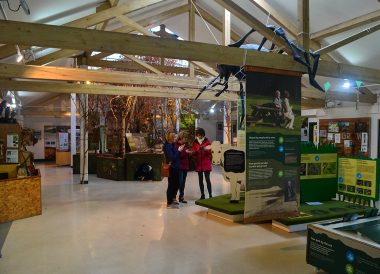 The most direct route would be by bus from Bangor (Bangor – Holywood – Belfast) where buses leave every hour or two from the main station. Alternatively, when coming from the opposite direction, they also leave from the centre of Belfast. The buses will then stop in the centre of Crawfordsburn Village next to the Old Inn. Then there is the train option, again following the train line between Bangor and Belfast. However the closest station would be Helen’s Bay (station found here) where it’s about a 1-mile walk to reach either Crawfordsburn Village following the main road, or Crawfordsburn Beach following the coastal path. The coastal path obviously being the more scenic. It is also possible to follow the coastal path from the opposite side at Carnalea Train Station, or even from Bangor itself, although this is obviously a fair trek. Anyway, I have shared all the options, car parks, and directions in our comprehensive coastal path post. Otherwise driving is the easiest option to get to Crawfordsburn Country Park with lots of parking at the park itself. If planning a longer stay I would also recommend The Old Inn Crawfordsburn given it’s the only hotel in the area. 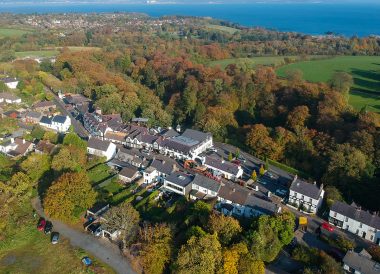