I can say we had no real enthusiasm for this trip to Dublin, given we had both caught colds on arrival to Belfast, and were coughing our lungs up on the bus down. But we also failed to find much excitement online either, where, unlike Belfast City Centre with its Christmas market at city hall, there was no real central area for shindigs and festivities to celebrate Christmas in Dublin. As it turns out that Dublin itself, or at least the main tourist and shopping districts, were all central to the festive season, meaning there’s a lot for us to explore with 24 hours in Dublin. So what began as a rather forced journey, ended as one of the best nights out in a long time, despite the boogers in our Guinness. As it’s pretty much all uphill from our arrival at Dublin’s Busaras bus station, where a bunch of tracksuit wearing neds, one in crutches, and another looking to have gone a round with McGregor, tried to scaff some money from us. 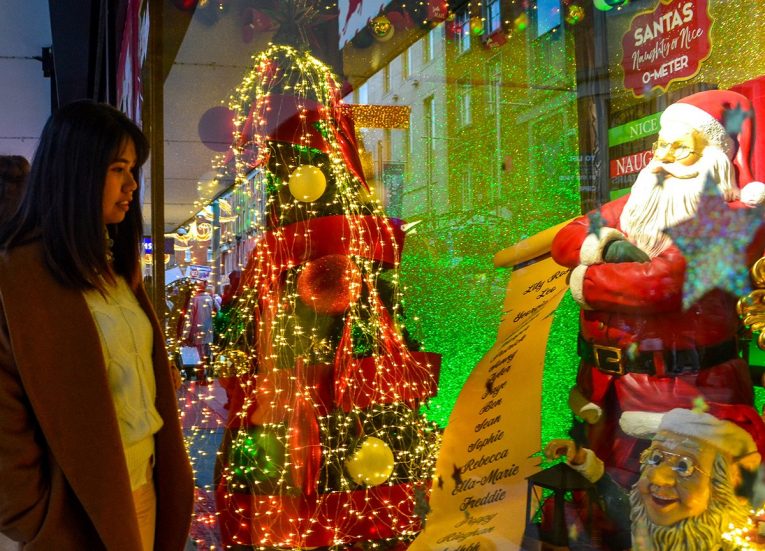 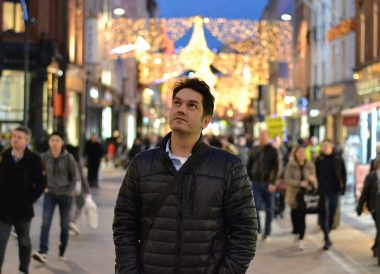 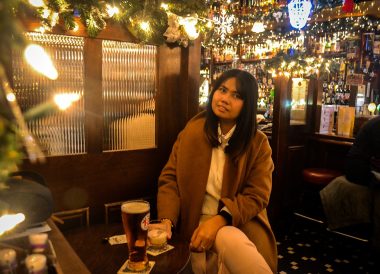 Our hotel is just a 4-minute walk from either the main bus and train stations (Busaras and Connoly), found on Talbot Street, which is a decent wee area lined with 5 Euro kebab and pizza shops, Spars, and liquor stores. It’s kind of the ghetto part of town, maybe best described as quaint and fusty, I guess, which really isn’t so different from the backstreets of central Belfast. It’s also one of the more multicultural parts of Dublin, where English speakers are roughly half-and-half at times, and you’ll maybe find the odd bloke talking or shouting to themselves. It’s probably a great area to pick up a cheap tracksuit, if interested. But it’s not overly intimidating otherwise, and bar the occasional drunk or beggars, which are found in most parts of Dublin’s City Centre, it’s a rather amiable area to stay, with cheap accommodation. Or free for us, through Agoda points, where we stay in the Celtic Lodge and Restaurant which overlooks the damp streets, kebab shops, and discount stores. But we don’t take any risks on the night, and while Fanfan planned for us to dress fancy to celebrate Christmas in Dublin, she conceded we don’t want to become targets for beggars and pickpockets, and she lets me away with jeans and hoody. As I don’t want to be too ‘Protestant looking’. 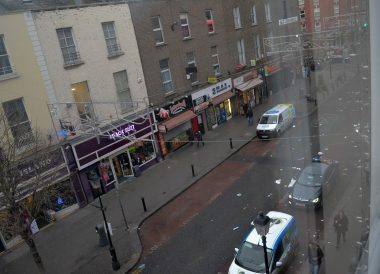 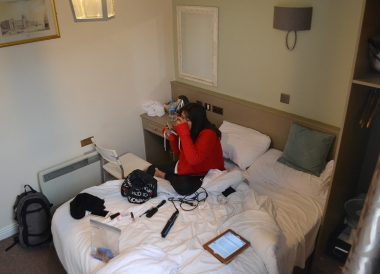 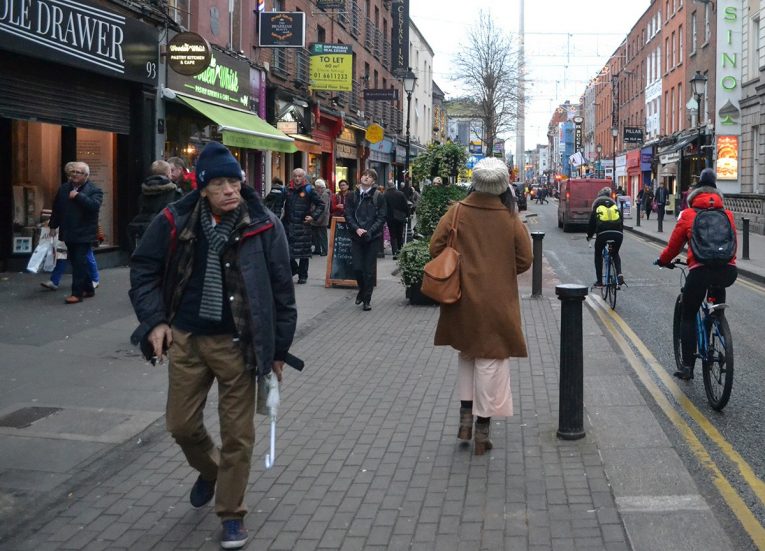 We have only given one night to celebrate Christmas in Dublin, yet we don’t leave the hotel until near sunset, to follow the Christmas lights from our hotel on Talbot Street, as they lead directly up to the to the Spire (O’Connell Street), and cross to the pedestrianized Henry Street, which would be the main shopping street on this near side of the Liffey River. And the street becomes less shabby as you follow along, where Christmas lights even line the street beneath our hotel window. But the fancier decorations don’t really start until the Christmas Tree at the Spire, continuing onto Henry Street, with the re-imagined ‘Dublin One’ shopping district. As this is one of the better-known spots for Christmas in Dublin, and the area is lined with stalls selling cheap Christmas crap, like jumpers, baubles and selection boxes (5 for 10 Euros if interested), surrounded by more high-end shops which add a bit of prestige to the decorations. One of the better would be the window display at Arnotts. But we otherwise spend little time here, as we turn off towards the River Liffey, to cross the Ha’penny Bridge. 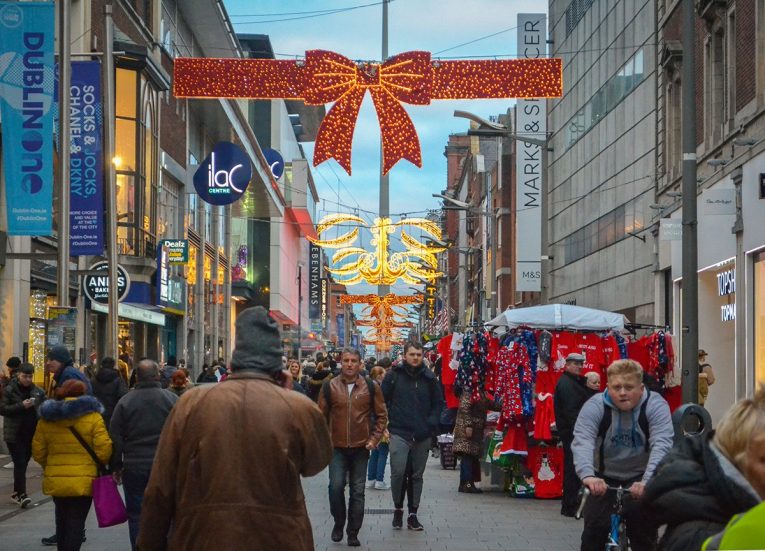 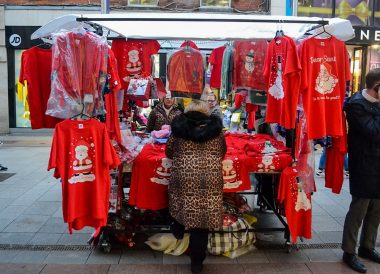 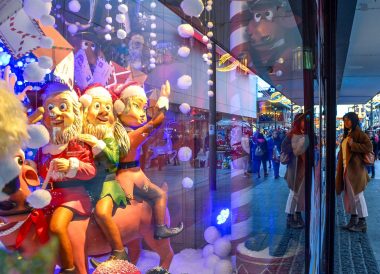 We cross the river onto the Temple Bar area on the opposite side, which we’ll come back to later, as we’re just in passing now, en route to the Christmas lights on Grafton Street. So Grafton Street would be the more high-end shopping street of Dublin, in the more upscale side of town, and this is why we stayed on the opposite. And they really do go all out for Christmas in Dublin here, where the extravagance really shows up the rest of the city. Although we’re only here for lots of nice photos, and after a walk up to Saint Stephen’s Green, we turn to leave again, as we otherwise have no business in this part of town. As we are doing this visit on a tighter budget than expected, where the exchange from Pound to Euro is near one-for-one at the moment, giving us just 100 Euros between us. And we could easily blow this on a few drinks on a night out in Dublin. We did consider a reroute to Saint Patrick’s Cathedral here, but I had already finished my stash of gin, and I was hungry, so instead we make our way back to the River Liffey. 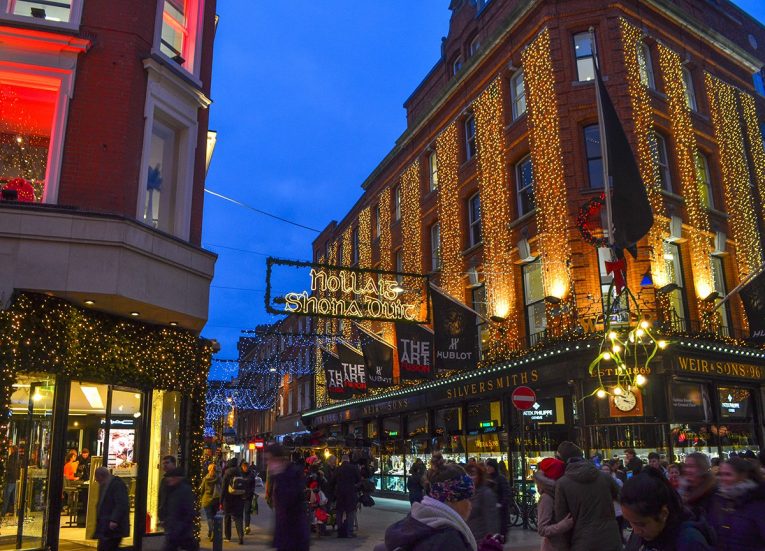 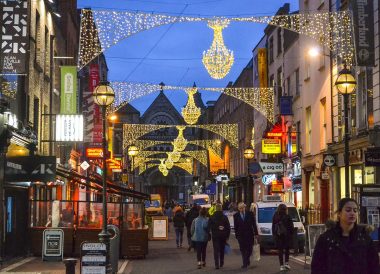 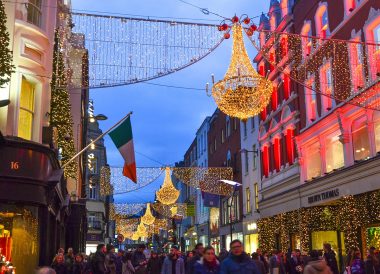 Again we avoid the main drag of Temple Bar for now, and eat instead at Fitzgerald’s on the riverside road, which is a decent wee place for pub grub, just across from the O’Connell Bridge. Although it is still on the far side of Temple Bar, but it’s a lot less touristy, and the place is half empty when we call in, and our sat next to a worker from the nearby souvenir shop (Carrolls Irish Gifts), and some gobshite slabberin’ at his mates about some bet they made. It’s more of a local place, meaning there’s a fair bit of swearing going on, as is the norm all over Ireland, so this post is by far my sweariest post to date, just to help acclimatize and ease in newcomers who have never been told to “away up yer arse” before. But it is otherwise a homely place, quiet and cosy, with cheap pub grub that is nearly half that of the main Temple Bar drag. But in no way losing in portions or quality (full menu here). So I go with the Beef and Guinness Pie (9.95 Euros), and while Fanfan was tempted by the Irish Stew, it was labelled “How Granny makes it”, and Fanfan’s granny is Thai, and likely would have made terrible Irish Stew, so she went for the Steak Baguette (11.95 Euros) instead. A massive meal with a pint of Guinness and Irish Coffee cost around 35 Euros. 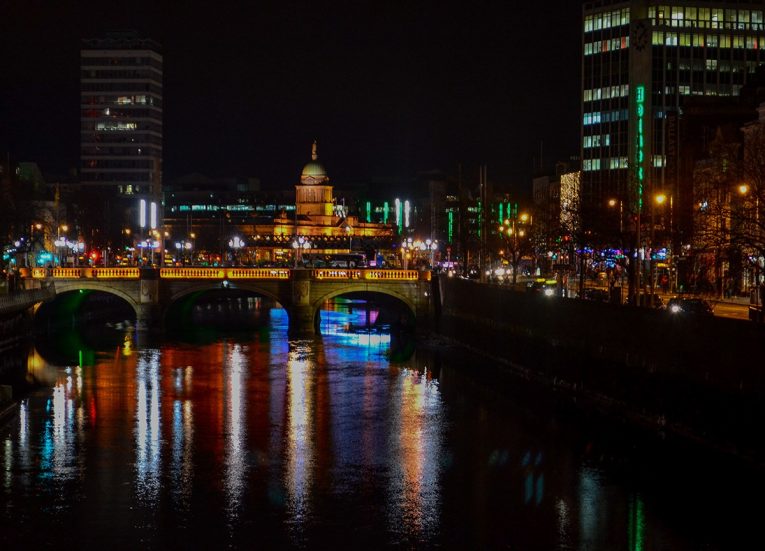 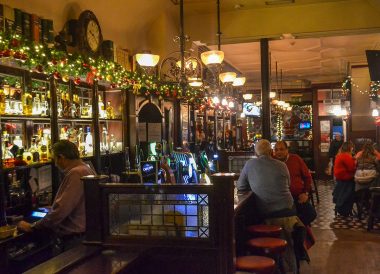 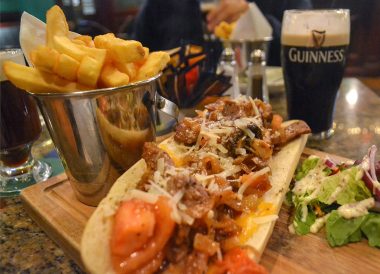 Temple Bar is the notoriously touristy part of Dublin, meaning locals will probably tell you “it’s a load of oul shite” before recommending some hip or trendy alternative, or maybe some local boozer with cheap pints, and a faint whiff of cigarette and piss. Although I do agree with the sentiment to some extent, however we are tourists, and we are in Ireland to experience these Irish clichés, no matter how played out they are locally. But in every visit to Dublin to date I have not been to the actual Temple Bar in the Temple Bar area, and until this visit I thought it was no more than the name given to the cobbled streets in which it’s located. Also I don’t think I’ve ever seen a live Irish band in Ireland either ’cause I guess they’re again “tourist shite”. But tourists do love “tourist shite”, and the much-loved Irish clichés are partly why Irish Bars are so well replicated across the globe. And as far as Irish bars go, they don’t really come as old, or authentic as many of those in the Temple Bar area of Dublin. Despite all the tourists that are in them. And students. But I really would avoid the area at busier times, like weekends maybe, and most definitely Saint Paddy’s Day, however it’s a Tuesday evening when we arrive, on the run up to Christmas (5th December), and there’s few other places in the world I’d rather be. 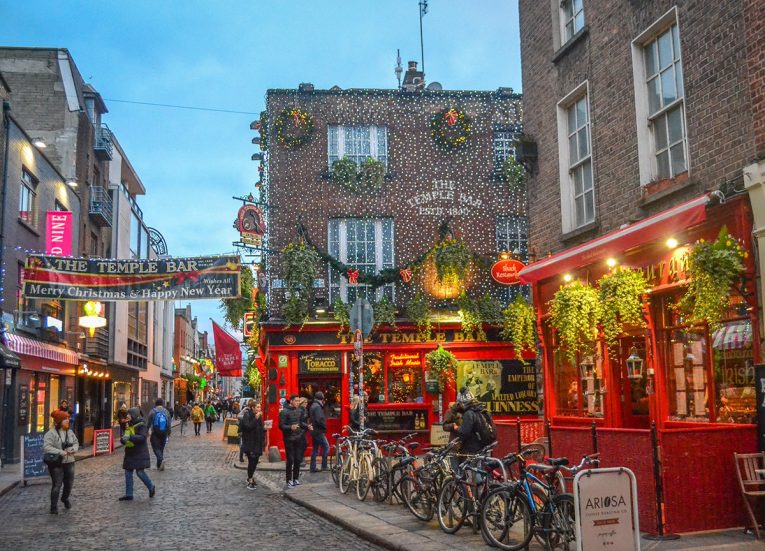 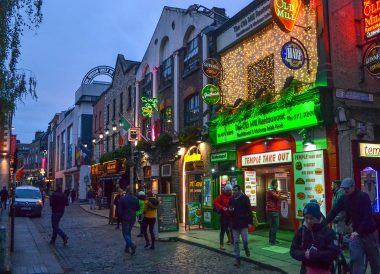 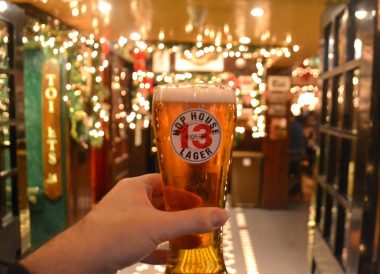 The Craic is Ninety

Otherwise nightlife in Ireland is all about the banter, or the craic as it’s known locally, which at times can be 90, whatever that means. But if ever it was, 90 it would have to be here, in the original Temple Bar Pub, which is packed to the gills with lively banter, jigging and live Irish music. It kind of epitomizes the atmosphere of Irish Bars for me. But for Fanfan it was more like a dream, and I could see she was close to happy tears, which reminded me of a night out 5 years ago in the old Dubliner Pub in Bangkok when she was in tears telling me the story of “P.S. I Love You”. So I couldn’t help ask if the bar reminded her of the scenes from “PS I Love You”, and I literally made her cry in the middle of the Temple Bar. It was adorable. Anyway, for two drinks, a pint of Hop House 13 (7.70 Euros) for me, and for Fanfan a glass of Baileys (7.65 Euros) costing over 15 Euros for the one round in Temple Bar. Which is not so different to most bars in Dublin City Centre, and it feels much worse for us now that the pound is crap. Either way, we were still coughing into our drinks, and after a millennial / PC version of the Pogues ‘Fairytale of New York’, we leave to cross the river back to the hotel. 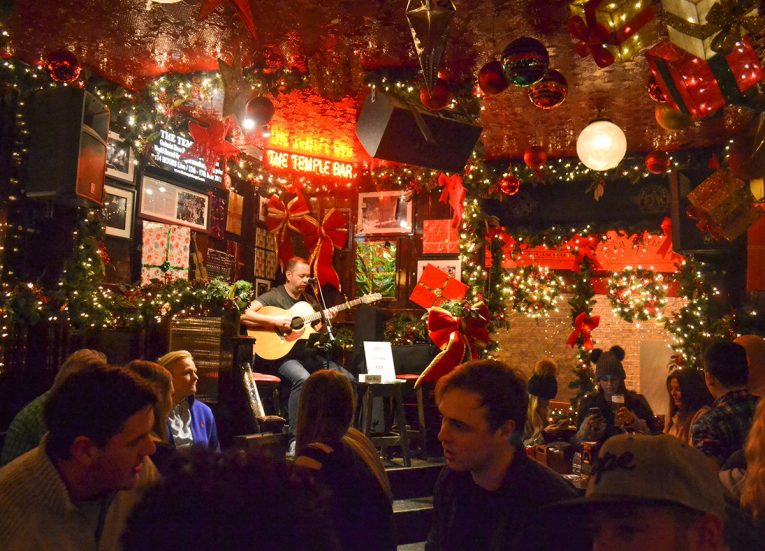 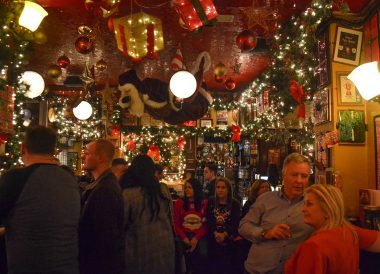 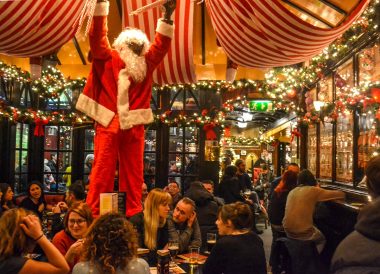 So, in the end, we spent little more than 55 Euros on our night out for Christmas in Dublin, which left us plenty for the next morning, when I had little planned but a 5 Euro kebab for breakfast before leaving. But the kebab shop opposite was still not open by 10:00AM, and Fanfan insisted that it is weird for her to eat alone in a cafe, so I accept to join her in eating a fry for breakfast. Only to be gutted as every pizza and kebab shop was otherwise open along the walk down to the Spire and O’Connell Street. Where we are eventually lured in by some fella wearing a lopsided sandwich board, with promises of a 5 Euro fry in the Flanagan’s Restaurant. It was more like half a fry. So we spent around 65 Euros in total, which was a lot less than expected, thanks to my personal stash of Gin, and our heavy bouts of Manflu. Add in the hotel (if paid), the bus tickets to-and-from Belfast, and the crappy exchange rates, and our Christmas in Dublin comes to £160 Great British Pounds for the two of us. 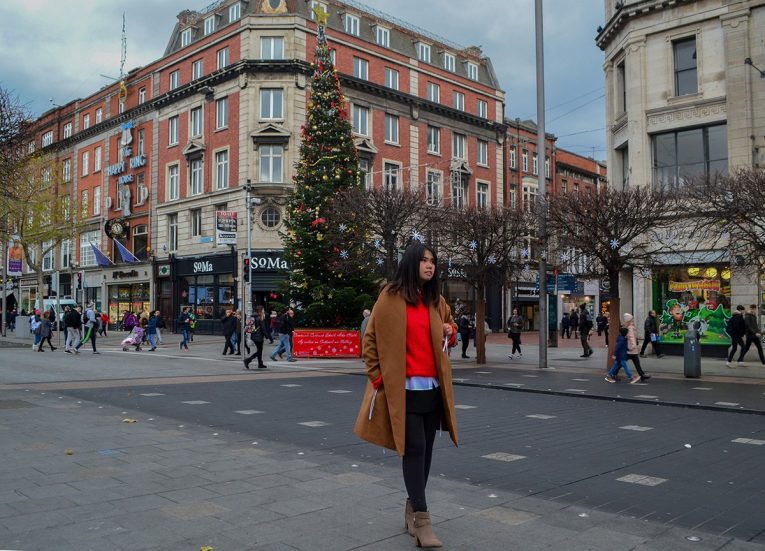 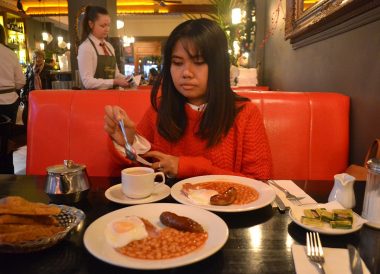 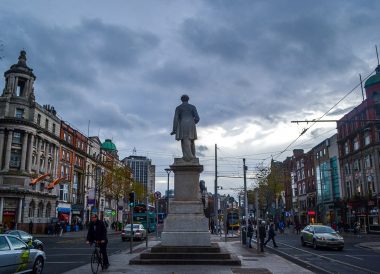