I really don’t understand the whole ‘eating out’ thing, where you pay twice the price, for mediocre food, while sitting in stuffy, uncomfortable surroundings. At the same time, I would forever choose chip shop food over any restaurant that I know. Because there are differences between chip shop food and restaurants, where, for example, I find the batter of fish and chips to be fuller and fluffier from chip shops, and the chips are almost always double deep fried, and there will likely be a decent range of sauces to choose from. Rather than just a dollop of tartar sauce and maybe a lemon wedge. And, while chip shop food is good to eat on the go, which ironically is “eating out”, I normally just order takeaway food for delivery. So I can enjoy them alongside the things that I like, with the comforts of home, and without people around to annoy me. Anyway, here I share some of the weird and wonderful chip shop food in Northern Ireland and the best takeaway food on the menu. 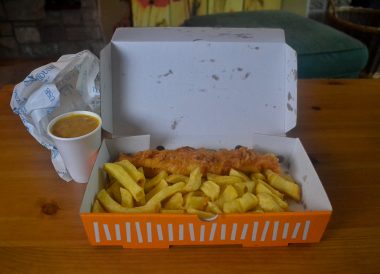 I should really point out that “Supper” in Northern Ireland is slang for “and Chips” (e.g. a ‘Fish Supper’ is ‘Fish and Chips’). So a Pastie Supper is Pastie and chips. But pasties in Northern Ireland are very different to the better-known pasties of Cornwall, where they are almost always deep-fried, instead of being baked like Cornish Pasties. And Cornish Pasties would probably be considered health food in comparison. As, like almost all takeaway food in Northern Ireland, they really are not healthy at all. But a Pastie Supper is about as Northern Irish as it gets, where sectarian songs are sung about them, and it is deservedly celebrated in our beautiful seaside town of Bangor with the “Pastie Supper Lover” sculpture in Pickie Fun Park. Otherwise, it’s a spiced pork, potato and onion pie, that has been dipped in batter, and deep-fried to delicious. 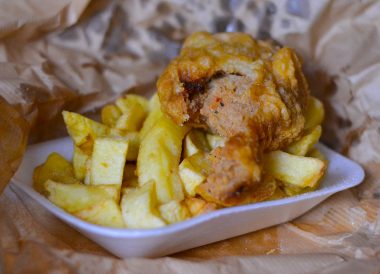 The Cowboy Supper is a chip topped with baked beans (likely Heinz or similar) with a couple of deep fried sausages thrown on top. It’s also a supper I’ve never bothered with until recently, despite being a staple in Northern Ireland’s chips shops for as long as I can remember. So this was specifically for research. And I can’t say it appealed to me, as expected, where the sausages are overly salty, and beans just really don’t have much flavour to them. As there are just so many sauce alternatives to mix-and-match with these days. Anyway, it is another unique chip shop food in Northern Ireland, albeit not the best, and I have no real idea where the “cowboy” reference appeared from. Although, by Googling “cowboy food” it seems “Beans were a staple on the frontier. They’re high in protein, and they stick to your ribs” and “Aside from meat, cowboys ate a lot of beans”. But thankfully chip shop food has progressed from the frontier days, and I’d much rather my sausages were battered, and my sauce was good and spicy. “Frank and Beans!”. 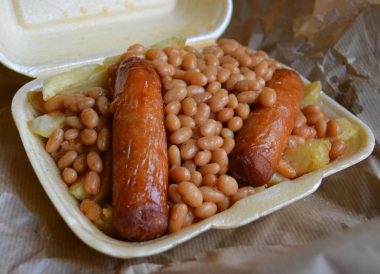 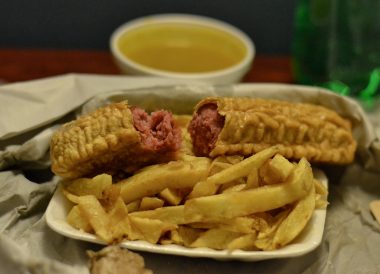 Every food is better when battered. And in Northern Ireland we go a whole lot further than the iconic fish and chips when it comes to battered foods, although we may not quite be on par with Scotland who batter pretty much everything. But we do hold our own, with things like pasties (as above), battered sausages, battered chicken (chicken goujons), battered prawns (scampi), battered onion (onion rings), battered mushrooms, battered burgers (steakette as below), and just anything really. Just ask at a local chip shop, and they may give it a go. Which is how the battered Mars Bar came about, as a somewhat mythical food, which you can actually just ask for in many chip shops. And they’ll just slap on some batter and throw it into the deep fryer. So I asked to prove this, which resulted in the delightful battered Mars Bar shown below. Although I really wouldn’t recommend it. Anyway, to batter food, just coat it in a thick egg batter, and then deep fry until beautiful, golden and delicious. 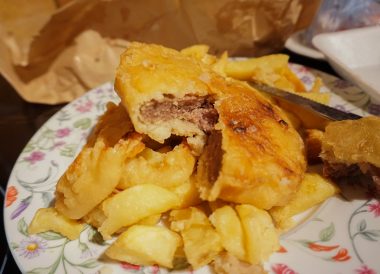 Chips ‘n’ Sauce is pretty much chips with sauce on it. Where in Chip Shops in Northern Ireland, they go a lot further than just the red (ketchup) and brown (HP or similar) options. As there will almost always be a short list of delightful sauces to smother over your chips. These typically include; a ‘Chinese’ inspired ‘curry sauce’, a thick beef ‘gravy sauce’, a thousand island dressing, beans or melted cheese. At least these are the more ‘traditional’ options. As, these days, there are all sorts of new additions to the chip shop menu, such as; garlic sauce, pepper sauce, Hawaiian sauce, barbecue sauce and taco Sauce… Then you can mix and match. And this has brought some more popular meal options to the menu; like a ‘cheesy beano’ (cheese and beans), a cheesy gravy chip (a bit like Canadian poutine), and one of my old favourites, a ‘cheesy 1000 island chip’ (cheese and thousand island dressing). Although I can barely stomach them these days. Anyway, I guess the best takeaway food is battered and covered in cheese. Note, all sauces can also be bought as sides and dips. 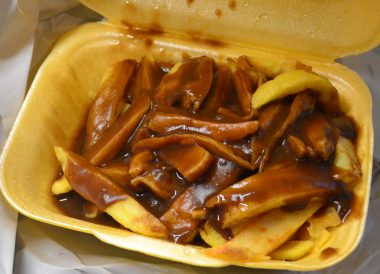 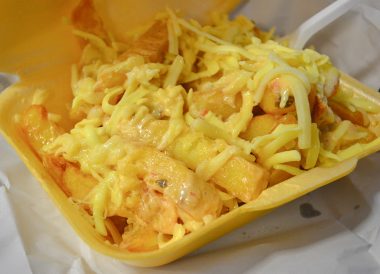 Every chip shop will ask whether you want salt & vinegar before wrapping chips or suppers. Although, fun fact, most vinegar in chip shops is not vinegar. As it is actually a non-brewed condiment so they have been lying to you all your lives. Again there will normally be red and brown sauce on offer, and again there are the options of big or small tubs of those tasty sauces above. However there are also a handful of other delightful items lurking behind the counter and on traditional chip shop menus. Such as mushy peas (marrowfat peas) that are often flavoured with mint (as below). Scotch Eggs are also common, with obvious Ulster-Scots influences, although we never were fortunate enough to find haggis, or black pudding, or red pudding, on our chip-shop menus. There will also be occasional ‘Meal Deals’, like at my local chippy (Colin’s, Bangor) where Smak Fizzy Drinks are included with meals, and this is about as old-school/ghetto as it gets in chip shops in Northern Ireland. Pickled Egg anybody? 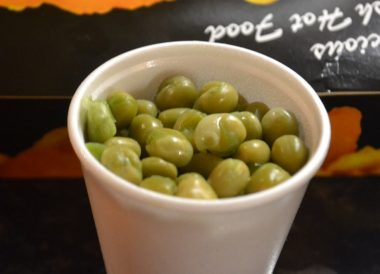 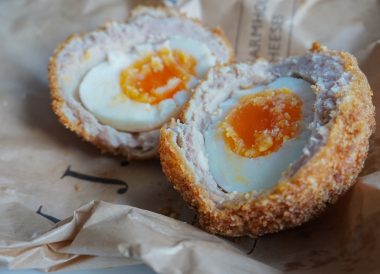 Kebabs occasionally coinhabit chip shops these days in Northern Ireland, or they’ll at least be found nearby. And, to be honest, I opt these days more for doner kebabs, over traditional chip shops. Simply because I love spicy food. And while I have eaten kebabs, gyros and shawarmas around the globe, it is the local interpretation of the doner kebab that I only crave for when away. Which may be due to the ridiculous amount of salt in them. Anyway, for the clueless, doner kebab is meat prepared on a rotating spit, before being shaved and stuffed into a pita bread, or a naan, or may be layered on chips. I Although I typically just go with the pita. However the secret is in the ‘meat’, here, where it’s lamb smashed with spices, salt and fat. As well as the perfect “kebab sauce”, known in Northern Ireland as “house sauce” which is flavoured (I think) with salt & pepper, chilli powder, and maybe a bit of garlic. I also go with added hot chilli sauce on my kebab, and freshly chopped green chillies. And maybe a bit of lettuce when feeling health-conscious. 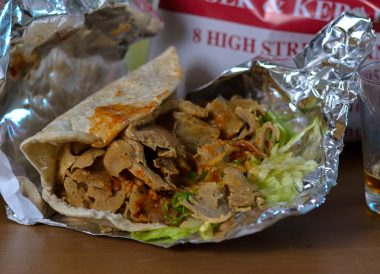 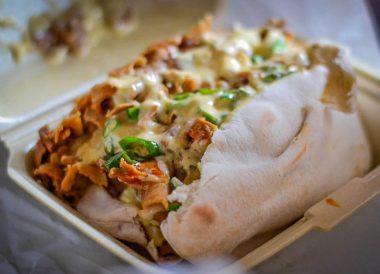 It’s hard to talk about Northern Ireland’s best takeaway food, without mentioning Chinese and Indian food in Northern Ireland. As they probably outnumber chip shops these days. And while they do often specialize more with sit-in restaurants and meals on delivery, there will always have some great takeaway options. Which I’m sure I’ll share in full at some point. But to share a couple of my own recommendations; it would have to be a curry fried rice from the Chinese, which is like a Cantonese-style curry served over egg fried rice. Or, from the Indian takeaway, I would normally just go for the hottest sauce on the menu over chips. And while Phall, often dubbed the “Hottest Curry in the World”, used to be my go-to option, I find an extra-hot Vindaloo to be far more flavoursome. Anyway, I’ll come back to all these down the line. 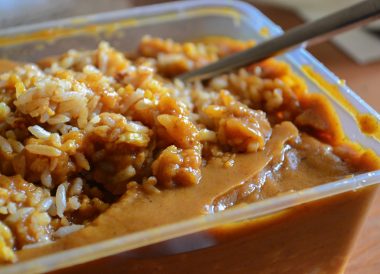